I sat down to rest for a moment on a bench under a shade tree just outside the Jordan Health Center. An elderly gentleman sat next to me leaning against the tree making rope out of a pile of string. As he turned and looked at me I knew at once it was Martin Ramadengar. I had never actually met Martin in person, but I had told his story in a blog article written back in May of 2011. 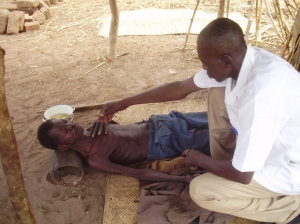 Martin receiving treatment in May of 2011

“Martin Ramadengar was near death when his family learned of the new dispensary in Dono-Manga, Chad 20 miles from their village of Mouassede. Against all odds they made the long journey carrying Martin who was too weak to walk on his own. Pierre Rimorbe, lead evangelist in Dono-Manga, reported that during the next three weeks our nurse Eloi Madjiadoum treated Martin, and he is now able to walk on his own and is getting stronger every day. But the clinic did more than heal his physical body. During his three weeks of treatment he and his family were taught the Gospel of Christ. Martin and five of his family members were just baptized into Christ.” 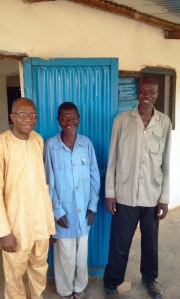 In April of the following year our friend Dr. Eni and our Director of Operations for Africa Rambi Ayala visited Dono-Manga and shared a picture of a healthy Martin with a big smile on his face. At that time he had decided he was going to stay in Dono-Manga and not return to his home village.

Martin making rope out of a pile of string.

Our visit came three years later and Martin is still in Dono-Manga. Martin is just one of the hundreds and hundreds of people who are alive and well because caring hearts were willing to give to make the Jordan Health Center a reality. If you would like to support this work click here to make your donaton.