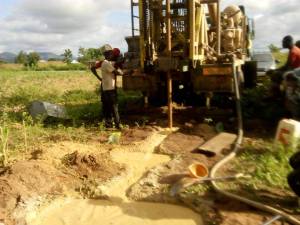 The drilling rig has arrived in Powishi Mongoro village, and there will soon be a new borehole/well from which to draw water. I say new day because for as long as Samuel was big enough he has ridden his donkey carrying two “Jerry Cans” and gone in search of water.

Samuel’s village of seven thousand has no well. The only sources of water are small shallow hand dug ponds and low lying areas that gather water during the rainy season and then are quickly depleted when the long nine month dry season begins. When these 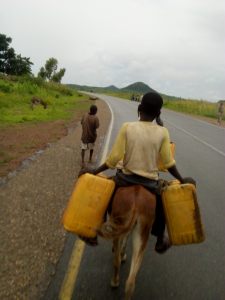 Samuel in search of water.

sources dry up, the search for water begins, sometimes consuming the major part of the day. Samuel’s family is one of the lucky ones; they have a donkey. Many have to make these long journeys on foot. 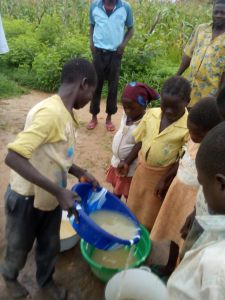 Jerry Cans holds five gallons of water and weighs about 40 lbs. Many from this village must travel two or more miles to and from there water source only to bring back water shared with animals and contaminated by animal waste and ground water runoff. Cholera epidemics are common in these areas where there is no reliable source of potable water. Unsafe drinking water is a major reason that 50% of children die before their 5th birthday without access to safe drinking water.

Here is Rambi Ayala report on the arrival of the well drilling machine. 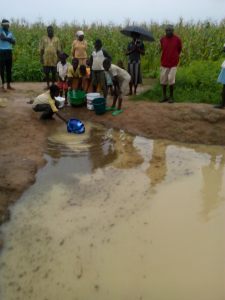 Shallow ponds and low lying areas is the only source of water for this village of 7,000

“The staff and equipment arrived at Powishi Mongoro in readiness for the commencement of the borehole drilling. We praise God for it and covet your prayers for a successful drilling. The villagers couldn’t believe that it has become a reality for them to own a borehole. Samuel, one of the boys in the picture who was seen helping others at the pond was almost in tears in expressing his joy over the turn of event in their community, this will mean liberation for him from traveling long distances on donkey in search of water and drinking from the stagnant pond during the rainy season. Thanks to Hope Springs and the ever willing donors who are making this possible. Details to follow.” Rambi 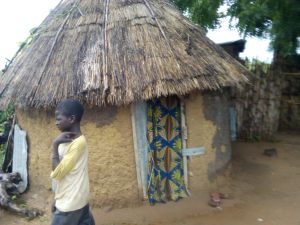 To those who give so sacrificially to make these wells possible here is God’s promise through Isaiah, “If you pour yourself out for the hungry and satisfy the desire of the afflicted, then shall your light rise in the darkness and your gloom by as the noonday.” 58:10

2 thoughts on “It is a new day for Samuel”