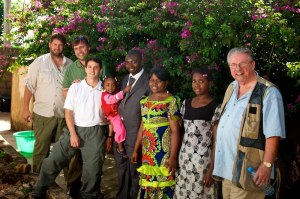 It is with mixed emotions that we bid farewell to a long time friend, brother and associate. Ebenezer Udofia. Ebenezer began his new position with Healing Hands International September first of this year. He has work as the Director of Operations for Hope Springs International since February of 2008. He was instrumental in getting the Pompomari Agricultural and Animal Husbandry Training Farm up and running and has overseen its operation until his departure in September.

Soon after taking the position with Hope Springs International, at that time called Arewa Aid, our resident missionary family was re-called. Although  Ebenezer barely got his feet on the ground before all these changes took place, he successfully accepted the new challenge posed by these events and rose to the occasion never missing a beat in the process.

While Ebenezer will no longer be working directly with Hope Springs International we have been assured that he will still be available to us with his expert knowledge of agriculture and animal husbandry should we need him.

Ebenezer is presently living with his wife Regina and daughter Grace , pictured above with mission team members, in Jos, Nigeria.

We at Hope Springs International are excited for the many opportunities that will be provided to Ebenezer in his new position and wish him God speed. 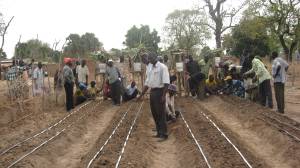 Ebenezer doing what he does best. Teaching the principle of dry season farming or drip irrigation in Dono-Manga, Chad in March of this year. 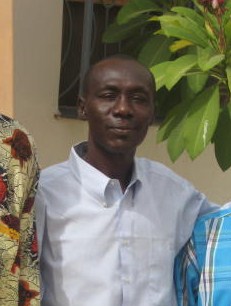 I just received a letter from Pierre Rimorbe the evangelist that Hope Springs has been working with in Dono-Manga, Chad since February of 2009.  I want to share a portion of it with you.

“All the churches of Christ, chiefs of the villages and Dono-Manga communities wish to express their sincere thanksgiving to God and to you for your kindness and love for our communities. We pray God will continue to support, protect you and pour his abundant blessings upon you. We give glory to God that great changes are happening today in these remote areas. We are tremendously blessed this year to have potable water, a clinic and mosquito nets. These donations have motivated many village people and their chiefs to invite us to establish congregations in their villages. [Even with the] Lack of preachers we have just established two congregations in Ter village II and Kang-yara village.”

Pierre went on to say that when he began his work in his home town district of Dono-Manga the religious make up was 70% Idol worshipers, 20% affiliated with a few protestant groups and about 10% Catholic. The largest protestant group in the area considered the churches of Christ a “drinking blood church from Nigeria”.  This is very similar to the thinking of many first century non-Christians about Christians who met in the catacombs. Misunderstandings about the Lord Supper and how the fruit of the vine represents the blood of Christ no doubt caused the confusion then and likely the confusion here as well.

Pierre also shared the events that caused him to send the original appeal for help to the Wulari Jerusalem Church in Maiduguri in February of 2009.

“Two years ago in Sara and Goulel areas when some members of the churches that had been established died of malaria and diarrhea, some of those who have lost their children and other family members abandoned the living God and went back to their gods to look for help. This tragedy obliged us to send our report to those who are involved in our mission work to give us a helping hand.”

Pierre goes on to explain the importance of the response to that appeal.

One of ten baptisms during our recent trip to dono-Manga

“We are thankful that God has brought us out of that tragedy to restore hope and rebuild the faith of these new converts through your help. The donations of boreholes (wells), drugs and mosquito nets during that disaster have reaped great harvest. 53 people have been baptized from May 2009 through October 2010 and two new congregations have been established”

Idol worship and superstition have been the gods of most people in Dono-Manga for hundreds of years. When they or their babies became sick they would take them to the shrines built to the idols they worshipped and they would pray to their gods to heal them. The combination of humanitarian aid and preaching the good news about Jesus is a combination that not only worked in the days when Jesus walked the earth, it is still powerful today. People originally came to Jesus for the loaves and fishes, but many of them became His disciples because they came to understand the love behind the gift.

Dr. Whittaker explains the use of mosquito nets and Pierre translates

Pierre continues, “Brethren, the distribution of mosquito nets from brethren in Nigeria and the USA has opened the eyes of mothers from many village shrines to abandon the traditional treatment (Idol Worship), and look for modern treatment. “

Women are now willing to bring their children for treatment when there is a medical campaign and there is much excitement about the new clinic and availability of drugs to treat common childhood diseases that have been responsible for the death of many children in the past. Pierre believes that the presence of the clinic will go a long way in encouraging women to trust modern medicine and not the traditional idol worship. We believe that many more will come to Christ as a result of seeing the love behind the gift.

Pierre also adds that education, especially of the young people, is a critical need for the future.

“As 90% of Dono-Manga people are farmers and do not have interest in education. Children are taken to the farms and some of are married early (12-15 years old for girls and 17-20 for the boys). Lack of education is one of the causes of this chronic infant mortality. Some new couples do not know how to protect a new born. They are not able to get enough food to feed their families.”

These young couples simply do what they have seen their parents do, try to survive through farming. But without the skills of dry season farming techniques and an understanding of how to preserve food for greater shelf life, they simply starve during the dry season and many, especially the children, don’t make it.

New Dispensary before windows and doors were added.

Pierre continues, “We thank God that you have already been our partner in some capacity in the spread of the gospel and teaching how to avoid sickness. We hope you will still continue to join us in this investment in the Lord’s work.”

While we have seen so many changes over the last two years and exciting days are ahead. Stay tuned for what God is going to do next.