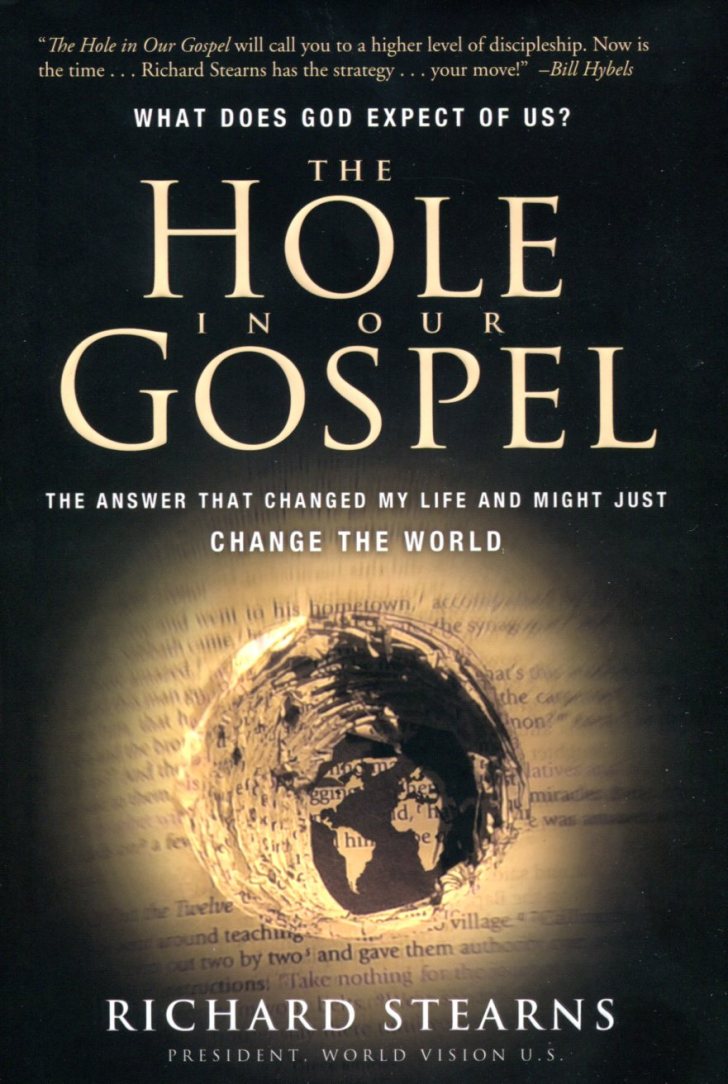 When Richard Stearns was in his twenties, a friend of his who was in seminary conducted an experiment. He went through all 66 books of the Bible and cut out every verse that dealt with poverty, wealth, justice and oppression. The result was a volume in tatters that barely held together. When he would speak to people, he would hold up this Bible and say it represented all the scriptures we tend to ignore. His Bible was literally full of holes.

Stearns, who serves as president of World Vision – a Christian humanitarian organization, says that if your personal faith in Christ has no positive outward expression, then your faith has a hole in it. In his recent book, The Hole in our Gospel, Stearns admits that his Bible was full of holes as well. Prior to becoming president of World Vision, he flourished in the corporate world. At the age of 33, he was named president of Parker Brothers Games. Prior to his calling to World Vision, he had been the CEO of Lenox, Inc., America’s fine tableware and gift company, for several years.

Stearns admits he agonized over the decision to become president of World Vision when it was offered to him. “I had been bombarded with wrenching stories of human suffering, confronted with the considerable challenges that would face the new president, and introduced to a language full of jargon and acronyms I didn’t even understand. Surely this was a mistake. What did I know about any of this? After all, I was a guy who had spent the last eleven years selling dishes – expensive ones. There had to be someone better qualified than me.”

With the support of his wife and five children, he left a 10-bedroom house, a nice company car and other perks and also took a reduction in salary of 75%. His friends thought he was crazy. But this book is not meant to focus on Stearns’ journey. That is just an example of how Stearns is trying to live his message. “Jesus reserved some of His strongest words for those who professed to be His followers but whose lives showed no evidence of their faith,” writes Stearns. For example, “Why do you call me, ‘Lord, Lord’ and do not do what I say?” – Luke 6:46 Stearns argues that faith and works must be put back together again. We can’t continue to regard our faith as our “ticket” to the next life.

Most of the book deals with the problem of poverty and the growing gap between the richest and the poorest people on earth. While statistics are provided and documented, Stearns believes they seem to excuse our inaction so he augments those with personal stories of real people with real needs.

Two statistics Stearns provides should break the heart of every Christian living in America:

The average giving of American church members in 2005 was just 2.58 percent of their income, and 98% of this money stayed in the US. “If every American churchgoer would tithe, we could literally change the world and eliminate the most extreme poverty on the planet for more than a billion people,” writes Stearns.

But Stearns doesn’t just focus on the problem, he offers solutions. And he doesn’t just focus on money, he addresses giving time and talent as well. When Jesus talked about having faith to move a mountain, did he mean it literally? Many have said no, but Stearns offers this. “What if Jesus meant for millions of His followers to each put their faith into action by grabbing a shovel – and challenging the mountain one shovelful at a time?”